We recognize that it takes a village to drive successful culinary job training programs. From delivering life skills to demonstrating knife cuts in the kitchen, there are many hands involved in supporting students. The annual Catalyst for Change Award was created in 2015 to recognize exemplary individuals within our network for their dedication and embodiment of their organization’s mission.

In 2022, after the passing of our founder, David Carleton, the award was renamed in his honor.  You can read more about his impact on our work here.

We ask the Catalyst Kitchens network to nominate their coworkers for the David Carleton Catalyst for Change award to shine a spotlight on those dedicating their time, passion, and resources to guide their students towards a successful career path in foodservice. After reviewing all nominations, our Member Board votes to determine the award recipient. 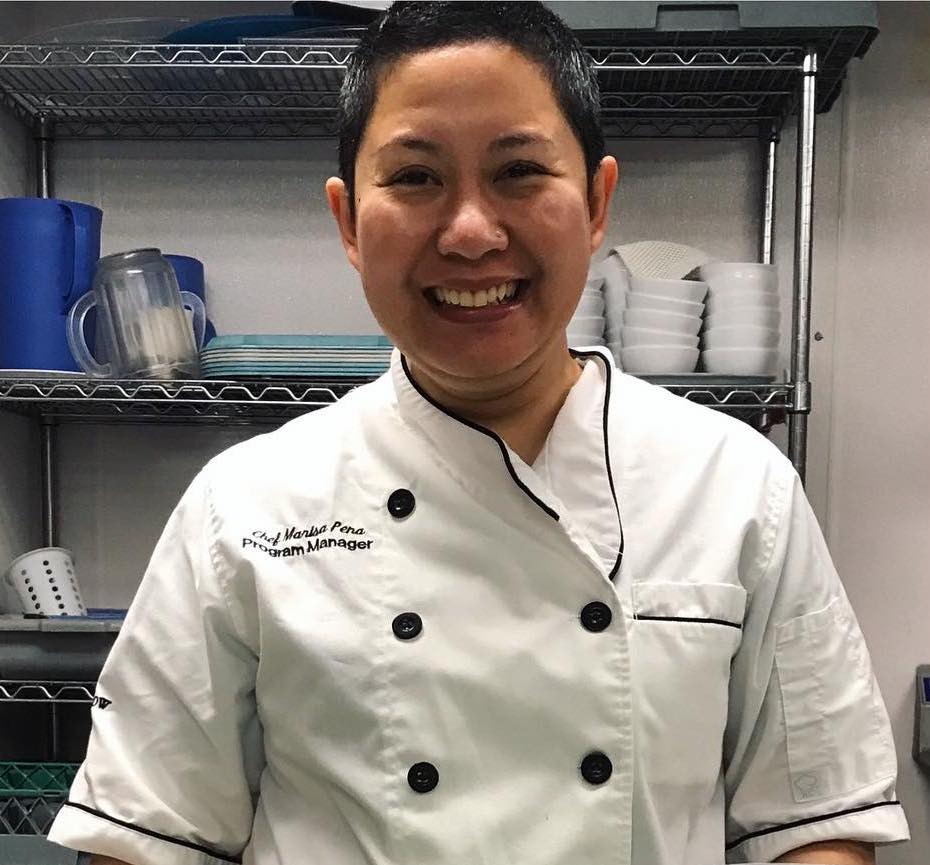 Congratulations to our 2023 winner, Marisa Peña of Breadline, Alaska, and their Stone's Throw Cafe and training program.  Chef Marisa rises to every new challenge as they come & always performs with the utmost excellence, compassion, professionalism & style.  We applaud her work, and look forward to delivering this years grant and working with her team on a few additional perks to send her way.

We had an especially competitive field of nominees this year, and we want to thank them all for their hard work to better their programs, kitchens, and communities.

Award recipients are profiled in our blog, sent a physical award, and recognized at our next Catalyst Kitchens National Summit. We strive to tell the story of all award nominees throughout the year to recognize their commitment to student success. 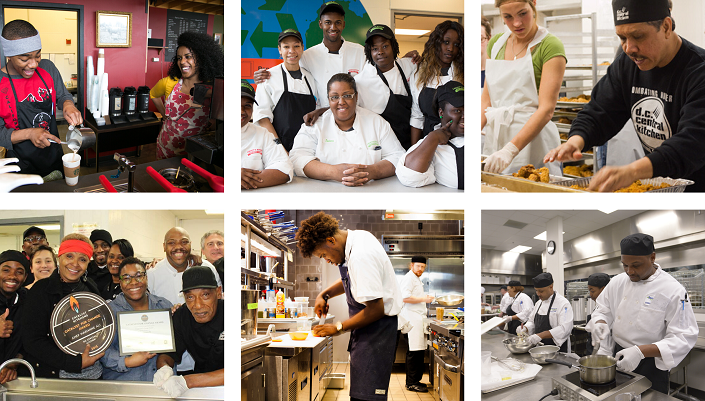 In 2022 we chose to rename this award to honor the impact and legacy of David Carleton, founder of Catalyst Kitchens and long time supporter and champion of programs in this field everywhere.

Here are some stories shared from our network of David's work, dedication, and joyful approach to helping everyone around him:

David was larger than life. He was a visionary, an award-winning leader in his field, and an amazing builder of community. He personified the African Proverb, “If you want to go fast, go alone, if you want to go far, go together.” David had what seemed like an endless supply of stories to share about his adventures together with family, friends, and colleagues. He was an inspiration to me in work and in life. He will be sorely missed.

Our relationship revolved around the business of helping others. We met via Catalyst Kitchens and knew each other a while before he paid Winston Salem a visit while helping us build a better program. That was the visit our friendship started in earnest. I can still hear him and Matt Gurney ribbing me about our “awesome” local coffee roaster. (They were not impressed). The lesson I learned from him transformed our program in ways that have lasted until present times. Our friendship lasted past his tenure with Catalyst Kitchens too. I wish I had thought to thank him more for his wisdom and encouragement. Miss you friend.

I met David at a Social Enterprise Alliance conference in the early 2000s. He and I were in the audience at a panel, and he was asking these really smart questions and talking about Kitchens with Mission and I thought, I have to meet this guy. Kitchens with Mission was in its early stages, and the more I learned the more I loved the whole concept. After just a few meetings with him, there was no question in my mind that I was going to start a program. He worked side by side with me as I launched a program in Pittsburgh underneath another nonprofit, and then years later, when I launched a new project as as independent c3, his team at Catalyst Kitchens (by then there was a whole team and they had become Catalyst Kitchens) helped me again. And in between and since, there were so many moments at various conferences and summits and events in cities all over the country, sitting across a table with David brainstorming (and planning and visioning and dreaming about what could be accomplished). He was, truly, the impetus and the inspiration behind the past eighteen years of my career.

David was an incredibly caring and generous human. I worked with him from the early days of Kitchens with Mission, through the launch of Catalyst Kitchens and beyond.  He was a visionary, a teacher, and a friend.  He knew how to provide criticism and advice in ways that were always wedded in kindness and wisdom. He was one of my first mentors in this work and we recently reconnected, so the sudden news of his passing was extremely upsetting.  I will always remember him as an inclusive leader and a pioneer in this work.

Such a good and dear friend, I will miss David dearly. David was also a joy to work with and his vision and passion were contagious.

Megan Karch, Former ED of Farestart, worked with David on the founding of Catalyst Kitchens

I met David 20+ years ago right before he left with Erika and Elliot for a year long adventure around the world.  Before he left he said - "We will be back - and when we do - I'd love to get involved with FareStart".   He did return - and not only did he get involved at FareStart - but he helped "catalyze all of our work" beyond what we could ever dream.   Starting out in Marketing he succeeded in getting Ira Glass (NPR) to record a radio ad for FareStart for free!  He created our tagline "Great Food... Better Lives".  Later on, David came to me and said "I think I can get this national work going!"  He not only "got it going" - but founded and built one of the most successful networks in the country - Catalyst Kitchens - with over 80+ members from the US, Canada, and Scotland.  David had his hand in the start ups of too many new organizations to count!  This year - we were recently connecting, and he let me know he was bound and determined to get a program going in Mazatlan, Mexico.  He was the constant creator.... who wore his heart on his sleeve.  David - I absolutely adored you... and am gut wrenched to hear of your passing.  Elliot and Rys - I hope you know how much your Dad made a difference in this world.  He surely did in mine.  Much love to you all.

And the award goes to...

Jackie Gibbs is YouthWorks’ Social Justice Kitchen’s Culinary Program Director. Those who learn and work with her share their appreciation of her establishing trust, accountability and connection to their work environment.  She teaches her trainees that the skills gained in the culinary arts are skills that can be used for the rest of their lives and that everyone should have the opportunity to learn how to prepare healthy, innovative meals for themselves and for others. 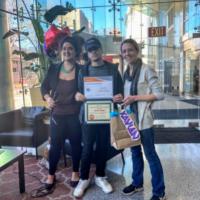 When hitting a rough patch in life, a listening ear and compassionate spirit can make all the difference. Meet Carla Domingo, workforce development employment navigator at Forge City Works, a longtime restauranteur turned teacher and counselor for youth and adult culinary training students. 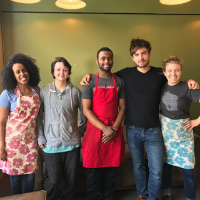 Jeru from RS Eden/Fresh Grounds led young adults to master barista skills, improving their customer service, and creating success in the workplace. Jeru did a little bit of everything at Fresh Grounds, providing 1:1 training support for students and managing the café’s sales and revenue targets. 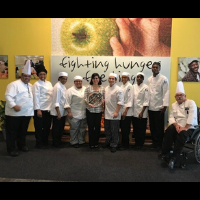 Through Idalia’s diligent efforts, SHFB's culinary training program has maintained a remarkable 100% job placement rate for graduates. Idalia is committed to the Life Skills portion of the curriculum and is "working tirelessly to secure sustainable streams of revenue to keep the program strong & meaningful.” 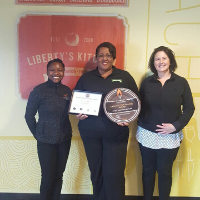 Tasheena Butler directs all culinary training activities for Liberty’s Kitchen’s Youth Development Program, providing disconnected youth with workforce and life skills training to become employed and self-sufficient. She is described by her colleagues as "the lynchpin of Liberty's Kitchen," a "charismatic leader" who is an innovative and skilled teacher. 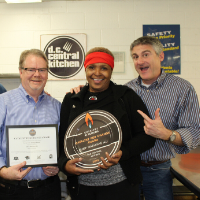 The first recipient of this award is the very special Chef Marianne Ali, Director of Culinary Job Training at DCCK. Marianne has given her heart and talent to supporting the goals of DCCK students. Her work with students increased graduate average starting wages by more than $1 per hour.